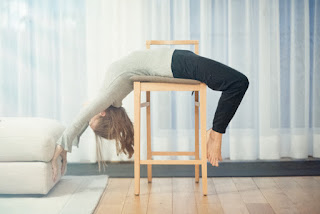 Yesterday I experimented. I wanted to find exercises that might prepare kapotasana. I used the chair on the picture and also an Iyengar chair. Both have to large seats for my body. It also hurts to lie on them, also when I cover them with blankets. It feels unstable to lie on them, there is no resistance.

It's more useful to get on the knees and to walk down the wall with the hands. It makes more sense to repeat this exercise or to stay longer in that pose than to lie over a chair.

I know other preparation exercises. Hanumanasana is such an asana. It stretches the front of the hips. Being able to do hanumanasana enlarges the flexibility enormously.

After all these years filled with forward bending asanas I love to bend backwards. 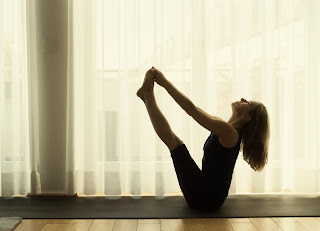 Today is Wednesday and I'll practice primary again. That is I'll work on strength again, I'll work on the vinyasas. I'll do extra exercises if necessary. I'll omit exercises. My back is still not 100% OK, but I'm on the right track. When pain is felt I switch from an ambitious attitude to a take it easy attitude.

Learning has changed a lot due to the Internet. Brian Aganad is also an online teacher. I had mentioned him already in one of my last posts. He offers online classes. This is rather new and very good. He corrects his students online. That is one sends a video and he analysis the movement and asanas. This allows him to give further tips. Perhaps the technique is not correct, perhaps strength is needed. It's difficult to analyze oneself. There is always a blind spot. I can be wrong, but this is what I understood when I read about his classes.

If my back was OK, I'd have joined. It's even less expensive than going to yoga classes anywhere. I don't give away the responsibility to a yoga teacher who has different interests like me. Yoga teacher usually want to teach 'traditionally', that is no extra exercise. no props, and so on. I was pressed forcefully in an asana often enough and this is the main method in Ashtanga yoga classes. The community needs more teacher who have a clue on didactic. To learn an asana the right way can make a difference. To learn asanas or vinyasas correctly can even avoid injuries.

This back injury gave my practice a new direction. 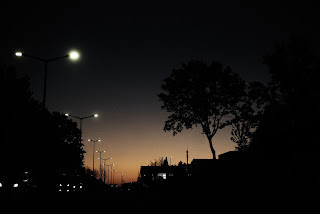 One must write one's own epitaph. One cannot leave this to other people. If one is a public figure one cannot avoid that others write about the own life and the death. But most of us are not that famous. If we don't want to turn around in the grave out of irateness, I recommend taking over this task.

I wouldn't like to have my employers listed in such a speech. This would also be a a speech a bit too long. A CV that we usually write to get a job has nothing to do in such a last speech.
To mention how sad we are is so redundant. And perhaps some people are not sad. What a allegation. If someone suffered for years death might be a relief.
It was mentioned that the death person, a woman loved to do skilled manual jobs. She loved paperhanging, I heard. No single woman of this generation loved paperhanging. They did it because most families had not enough money to delegate this work. The housewives did everything out of a necessity, even paperhanging.
Lately I saw a Swiss movie (Die göttliche Ordnung). It was about womens' right to vote in Switzerland. In the 70s women were not yet allowed to vote. There was also a funeral in the movie. A priest hold the epitaph and described the dead woman as modest. It's true that this woman ended in the poor house, but not because she has been modest. She worked like hell in her own restaurant. Yet she had no bank account of her own. Her husband was a drinker and used up all the money. The story is based on facts. This woman was more or less robbed by her own husband. One of the suffragette stood up and told the truth.

Thank you.
This can be enough. Just these two words. To start with a list why one was thankful is a trap. One always forgets something.
Thank you and inviting the guests to a funeral feast. Enough.

After the speech the husband of the dead person stood up, went to the coffin and knocked hard on it. First he took his fist, then he threw his head against the coffin. Hard. Again and again.
Then he left the hall and headed for the bench in front of the mortuary chapel. He took off his glasses and dried his tears.

Sandwiches and cakes were offered later.

At night we arrived in Munich. 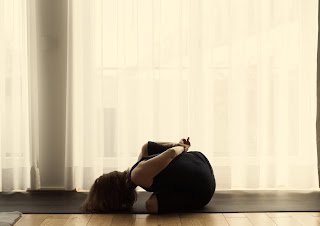 Two parties and one funeral in one week. This is going to be an intensive week. One party was yesterday, the other one is today. There is always something to celebrate: birthdays, anniversaries. The funeral is in Monday.

When getting older funerals become more often. Friends, relatives, neighbors leave us forever. A funeral is an opportunity to meet the friends and relatives, perhaps also neighbors of the person who passed away.
We don't have a guarantee, that our last time on earth is pain free. There are pills, yes, but they have often side effects that are a burden, too. Some pain killers are so strong that the person who takes them gets into a delirium. Pain killers can kill all other sensations, too. My friend A who passed away in March told me, that the digestion is not working anymore, when she takes pain killers. My friend had 2 very awful last days after a long illness, lasting years. The woman who passed away a few days ago (a distant relative) suffered a week. She wanted to finish her life earlier so bad was the pain. Death can become a relief.

Death is a taboo in our society. It seems to me that we all think we live forever. Funerals are reminders for me that also my life is limited. It helps to make wise decisions in daily life. How to spend the remaining time is a good question. There is an end to everything.  Is it really worth the time being angry about more difficult contemporaries. Is it really worth the time to complain. Isn't it more fun to be friendly.

Often life aggravates when people get older I'm convinced that a daily yoga practice can help to stay healthy and fit much longer than without yoga. But who knows our fate?

Yoga also means to exercise mental skills. They are evenly important and can improve life as well: being content, being relaxed also in difficult life situations, exercising concentration is as useful as being able to reach the toes when bending forward.

Today is a yoga free day and party time. Life must be celebrated. 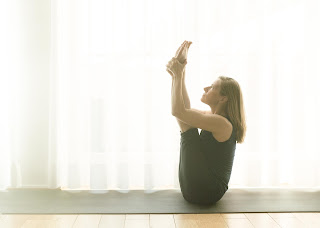 Being patient is a mental skill, that we can exercise. I need a lot of patience these days. Also primary is no more easy for me, mainly because I got weak. Performing the asanas is surprisingly good, performing the vinyasas is difficult.

Practicing with as less back pain as possible is what matters these days. That meant today that I had to leave out all the asanas of the closing sequence. I sat down in lotus pose at the end and was thankful that I practiced.

The picture is from today. I took it at the end of my practice.

The practice tells me what shall be the focus next time. It is the vinyasas. I've a lot of exercises that i can integrate. Pictures will come.

Connected with the online community 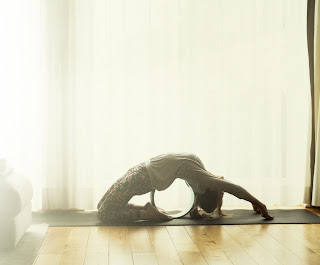 What I learned from my back injury is that it's very important to practice at home. Of course it's necessary to go to a yoga class if one has done no yoga at all. Yet the earlier one establishes a home practice the better it is.
The knowledge on didactic, how to learn an asana, does not exist in most classes. Getting pressed forcefully into an asana is the main method. Rules got stricter and stricter over time in the Ashtanga yoga community. Variations are not allowed, preparation asanas are not allowed. Every day I should do the same routine, because one asanas was not perfect enough. This was not my view, but the view of a teacher. This all has nothing to do with one teacher, it is how the authorized teacher shall teach. Two and a half hours I practiced every day. The success didn't come.

Yet there is a very supportive worldwide community. Here I find my teacher. One of them is Brian Aganad. I subscribed to his newsletter. Here is a quote by him: "But this is what I discovered: I went away for probably like 4 months or so to learn all the pieces and when I came back, I saw for the most part everyone in the room was more or less in the exact same place."

To develop discipline might be even the easy part. I loved to meet people, I had fun. I loved to socialize. It's great to feel part of a group with like-minded people.

Back to Brian. I linked to his YouTube channel. He recommended to practice primary backwards in one of his last letters. This is what I want to try today. I'll also add his strength training exercises, too. Jumping through is possible, also for me.

I alter primary with second series these days. To alter the series feels good. To practice primary AND second series till kapotasana is too much for every day. I shake my head: Why haven't I seen this earlier.

(A bit much complaining in that blog post. Who cares. It's also meant to be a warning.) 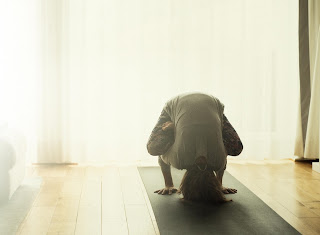 What a surprise. Today I got a cheque by Amazon.com. Thank you to all the readers who still buy things at amazon via my blog! It's very much appreciated!

My daily practices were interrupted because of a cold and because of a trip. I regretted this as I had so much swing and motivation.

I'm at home again and practiced again this morning. Another new start. I love the asanas. I added 10 minutes of meditation today. Wonderful. I got calmer and calmer with every breath.

I'm still shocked how weak I became. I tried a pose this evening that was easy a few years ago. See picture. I tried to lift up my body, so that all the weight would be on my hands. My arms were not strong enough to do this. I lost also core strength. I was in that pose and I couldn't move upwards. This was even funny.

Yesterday I experimented. I wanted to find exercises that might prepare kapotasana. I used the chair on the picture and also an Iyengar chai...